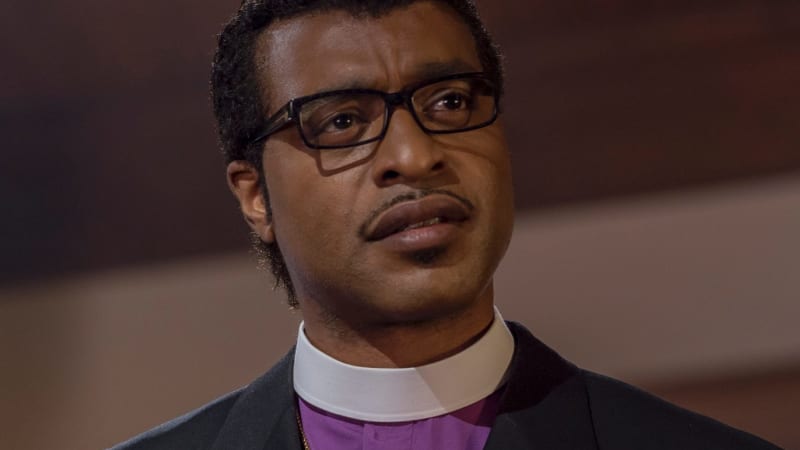 In Come Sunday, Ejiofor explores the fall from grace of renowned Oklahoma evangelical Carlton Pearson, who comes to believe that there is no such thing as hell. The implications are shuddering for that branch of faith: Without hell, everyone is saved, regardless of belief or behaviour. There's no need to go to church.

"Whether or not somebody individually believes in hell or doesn't is just a simple personal decision of limited consequence to the outside world. Obviously it's important to that person. But if you're a preacher and you're preaching that there's no hell, well, that's a very, very different thing," Ejiofor says. "It's heresy."

Viewers watch the anguish Pearson endures, caught between church doctrine and his own beliefs. The bulk of his flock leave and he is forced to downsize his life. Ejiofor compares Pearson's journey to that of a Shakespearean tragedy and commends the preacher for "a very certain, very specific kind of bravery".

"It was just a very powerful push and pull, a very powerful sort of torment," he says. "That was what the story represented to me – a man finding out how to think differently."

​The final film is melancholy and moody, often capturing the actors in stillness and deep reflection. It's an adult movie about big ideas that's not interested in pandering or ridiculing religious audiences.

"I think we can be in danger of not understanding each other because we're not connected to these very, very strong religious and philosophical links in the way that we think."

Pachinko review: Min Jin Lee’s saga of Koreans in Japan is hard to put down

The Flick review: The slow death of film makes for transformative theatre

Lyrically, it primarily focuses on two aspects of the Carters' lives: their marriage and their success. END_OF_DOCUMENT_TOKEN_TO_BE_REPLACED

Griffiths, who is about to begin editing the Melbourne Cup drama Ride Like A Girl after finishing the shoot, endorsed Hollywood star Sandra Bullock's recent comment that it was time for women to "stop being polite" about gender equality. END_OF_DOCUMENT_TOKEN_TO_BE_REPLACED

"Decades after the nations child welfare system ended the use of orphanages over concerns about the lasting trauma to children, the administration is standing up new institutions to hold Central American toddlers that the government separated from their parents." END_OF_DOCUMENT_TOKEN_TO_BE_REPLACED