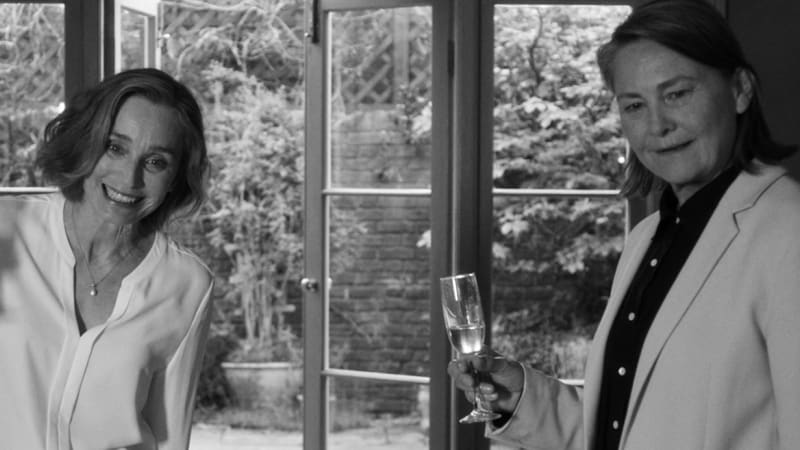 We're in great company and the story's physical confines don't restrict its range or ambitions. As well as dissecting a 30-year marriage, Potter's script takes in the state of Britain today – or rather, the left-leaning side of its political base.

Janet (Kristin Scott Thomas) is giving a party to celebrate her new job as Shadow Minister for Health and, initially, the mood is congratulatory. By the end of the evening, however, it's degenerated to the point where murder is a distinct possibility.

Nonetheless, there is plenty of fun to be had along the way. Some of the most caustic lines go to the svelte American actress, Patricia Clarkson, cast as Janet's best friend, April, who is blessed with a keen eye for the hypocrisies essential to political life.

While she applauds Janet's efforts to infuse some integrity into the system, she believes they're doomed to failure. And when she's not preoccupied with her predictions, she's snapping at her boyfriend, Gottfried (Bruno Ganz), a "life coach" who seems to regard the other party-goers as suitable subjects for treatment.

And he's right. Martha (Cherry Jones) and her much younger lover, Jinny (Emily Mortimer), are undergoing a domestic crisis brought on by Jinny's discovery that she is carrying not one baby, but three, and Cillian Murphy's Tom, a wealthy financier regarded with deep distrust by the others, keeps rushing to the bathroom to snort cocaine. He's also carrying a gun.

And in the centre of the turmoil is Janet's husband, Bill (Timothy Spall), who is slumped in his chair, mysteriously reluctant to utter a word.

As all this plays out, Janet, in an apron, divides her time between the chaos and the kitchen, where she's soldiering on over the vols au vent because her left-wing beliefs won't allow her to hire home help.

Potter cannily paces the revelations that energise the plot while her actors extract full value from her every line. The fact the script supplies most of the characters with only sketchy background stories doesn't matter.

Armed with his own brand of unshakeable self-confidence, the seemingly gormless and ever curious Gottfried is so impervious to April's insults you can almost understand how they got together. And Murphy invests Tom's hysteria with so many comic flourishes that he doesn't have to be believable.

At the other end of the physical spectrum is Spall's Bill, a crumpled mess, sinking ever more deeply into his chair. We are afforded an outline of his years with April.

We know he's an academic and that he's been the loyal supporting player to her rising star and as the reasons for his current state of depression are revealed, we see just how much this role has cost him.

Potter is mining a timeless theme here. She's interested in the relationship between the personal and the political and just how accurately one mirrors the other. Among this group, the only political outsider is the overwrought Tom.

Even April, the cynic, is, in principle, a liberal. And the others, old friends, like to think their politics are reflected in their behaviour towards one another. But by the party's climax, those convictions are in tatters.

The twist at the end serves as a punchline to the mordant joke the party has become and you could write it off as a gimmick – an abrupt descent into absurdity – but there's such wit in Potter's dialogue and such verve in its delivery that only a party pooper could complain.

Dec to host Britain’s Got Talent without Ant

Movie of the week on TV: Salt