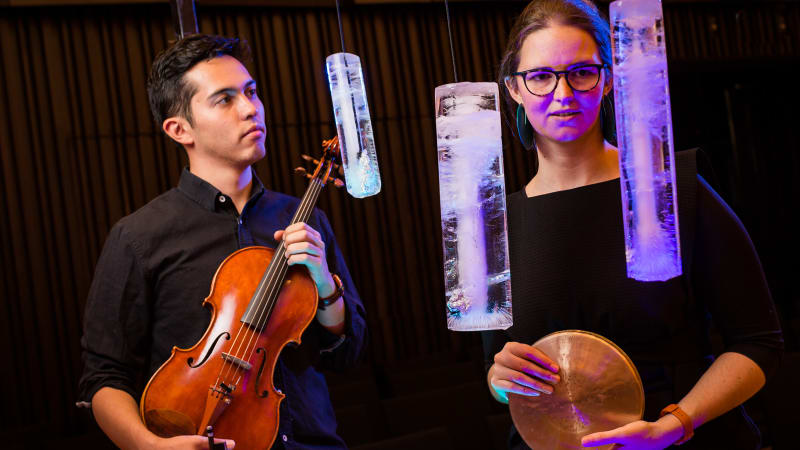 “We never know when a chunk is going to fall,” says Thea Rossen, who founded the Ad Lib Collective with saxophonist Jesse Deane.

“We have no control over it and the performers dont respond [to what's happening]. Its really about the audience reaction.”

Partly inspired by John Cages explorations of indeterminacy and the work of Australian percussionist Vanessa Tomlinson, Rossen says the performance is a comment on how climate change can abruptly and violently permeate our lives, as with bushfire or flood.

Speaking to The Age from Melbournes sister city of Boston, where she is further exploring the concept on a creative Hugh Rogers Fellowship, Rossen notes just how quickly life can return to normal after a natural disaster.

“We go back to ignoring it, and I find that really fascinating,” she says. “How can we jerk ourselves out of that complacency?”

A self-identified beach girl based in Melbourne (who misses the sunnier climes of hometown Perth), Rossen wants to use her musical skills to break that cycle.

“It actually started for me in the ocean, because I love snorkelling and swimming and its a really important part of my identity,” she says.

“With rising water temperatures affecting acidity, it's [climate change] having a devastating effect on our beautiful reefs, particularly in Australia. I dont pretend to be an expert, but I was like, How can I be useful in my role as a musician, as a creator and collaborator, and add something to this conversation in a different way?”

Though she switched from an engineering degree to study music – first at the University of Western Australia then at Melbournes Australian National Academy of Music – Rossen loved physics and chemistry at school and has a great deal of admiration for the work of climate change scientists. But she worries something is getting lost in communication – “because otherwise everyone would be galvanised into action”.

Thats where she thinks art and music can come into play. “I hope that adding a voice to this discussion will help inspire people to change the way that they treat the world; or maybe theyll become more engaged with local government and call on politicians to act,” she says.

Its not just the melting cylinders in the performance, so redolent of retreating ice caps, that draw on this sense of loss. The very music Rossen and co will play taps right into the scientific research on this man-made disaster.

One piece, Sounds of the Reef, which she began work on in her final year at ANAM, translates Bureau of Meteorology data on rising sea temperatures into musical notes played on vibraphone and Deanes tenor saxophone.

As well as inspiring action, Rossen hopes the work will bring environmentally minded audiences together in celebration.

“I think that with the Metropolis audience, it will really be a case of preaching to the converted,” she says. “But they need to know that they are supported – the community needs as much strength as it can get.”

Christian Hull: the secret to making a hit YouTube video

Lyrically, it primarily focuses on two aspects of the Carters' lives: their marriage and their success. END_OF_DOCUMENT_TOKEN_TO_BE_REPLACED

Griffiths, who is about to begin editing the Melbourne Cup drama Ride Like A Girl after finishing the shoot, endorsed Hollywood star Sandra Bullock's recent comment that it was time for women to "stop being polite" about gender equality. END_OF_DOCUMENT_TOKEN_TO_BE_REPLACED

"Decades after the nations child welfare system ended the use of orphanages over concerns about the lasting trauma to children, the administration is standing up new institutions to hold Central American toddlers that the government separated from their parents." END_OF_DOCUMENT_TOKEN_TO_BE_REPLACED