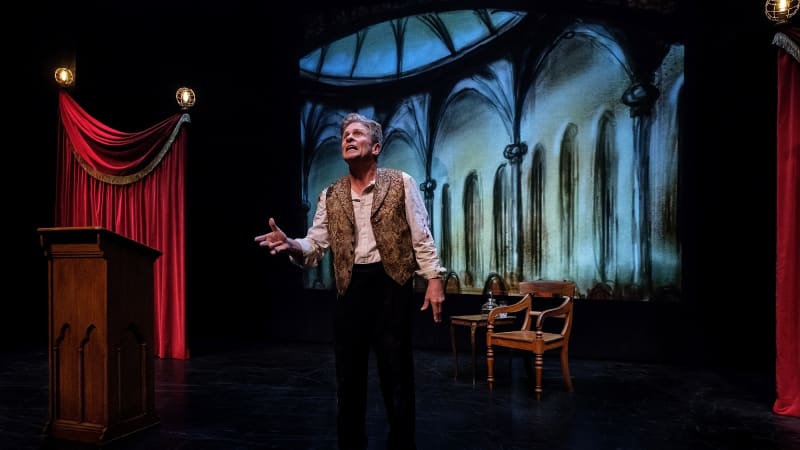 This demanding one-man show by playwright Frank Gauntlett is based on that 1895 work and stays faithful to the tale.

Our unnamed time traveller enters as the very model of a then-modern Victorian man of science. Confident and patrician in sombre frockcoat and gold brocade waistcoat, he takes to a podium as if delivering a lecture.

He exits and after an unsettlingly long pause re-enters as a man transformed. Dishevelled, abject, his confidence vanished, he looks like a man who has starred terror in the face.

Over the next 70 minutes we learn what has brought about that transformation. He has invented a time machine that can transport him far into the future and back.

He has ventured more than 800,000 years into the future arriving in an Eden-like world inhabited by the Eloi​, who live like demi-gods on the fruits of their fertile, pristine land. But beneath this tranquil surface, live the brutal Morlocks who feed off the Eloi.

Wells, a committed socialist and influential political thinker, created a world sharply split into haves and have-nots, labour and capital, creating this futuristic society to highlight the fault lines he saw in his rapidly industrialising society.

As the time traveller ventures further into the future he arrives as the post-human planet enters its death throes, as the blood-red sun grows larger and the Earth ceases to turn. With its apocalyptic vision of environmental catastrophe, it is this aspect of the tale that is arguably most affecting today.

More than a century on, it is hard not to see in the time traveller parallels with the imperial adventurer blundering into foreign lands, patronising the natives before inflicting murderous destruction.

Mark Lee, as the time traveller, evokes the poetry of this dense text and brings an intense presence and physicality throughout. Best known for his role in Gallipoli, Lee's tenderness with the Eloi female he saves, then loses, is poignant and his horror at his encounter with the cannibalistic Morlocks​ is palpable.

Is it time to make low-budget Australian movies cheaper at the cinema?