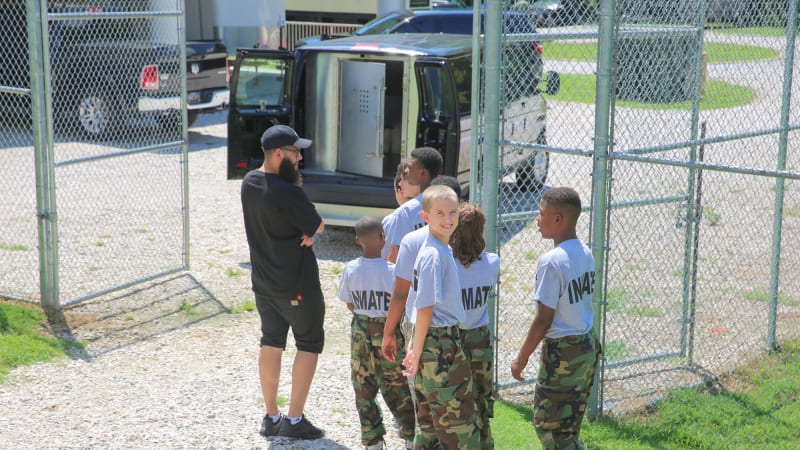 What do you do when your kid is going off the rails? If you're a desperate parent in South Carolina, you send them to Project Storm, the Ches‍‍County Sheriff's Office Showing Teens Our Real Mission Program. It's a weekend-long program where delinquent teens are treated like inmates – they wear a prison uniform, perform military exercises, and are generally subjected to an experience so unpleasant, it will (hopefully) deter them from continuing down the wrong path. When some boys are reduced to tears during the training, the officers, who pride themselves on their fear and punishment approach to deterring crime, deem them "girls" and "sissies". Presenter Jamali Maddix is visiting the camp as part of his Hate Thy Neighbour VICE series in which he meets controversial groups around the world. He's a particularly good fit for this episode as a self-confessed former teen menace, and is able to get on the boys' level (throwing footballs, calling them "brother", high-fiving them). Occasionally Maddix's cool dude schtick becomes tiresome. The documentary is spliced with his stand-up comedy, which often draws from his experience filming this show, and anecdotes, like him being recognised as "that motherf–ker from Vice!" don't quite ring true. More impressive is his defence of one of the boys at the episode's end, when his mother arrives late to pick him up from camp, missing the graduation ceremony. "Do you think anything else needs to change, other than your son's behaviour?" he asks repeatedly. After watching him stand idly by when the kids were put through their gruelling paces earlier, it's good to see him standing up for the little guys. AR

Antonio Banderas plays Pablo Picasso, his severe hair parting and equally severe scowl making him look disconcertingly like a greying Adolf Hitler. But Banderas doesn't get much of a look-in as this bio-drama series gets under way tonight. Sure, his older Picasso is making a start on Guernica and enjoying the enmity between his mistresses, Marie-Therese Walter and Dora Maar (Poppy Delevingne and Samantha Colley), but most of this whipsawing episode involves younger actors playing younger Picassos. Sadly, it's nothing like the terrific start that executive producer Ron Howard gave Genius' Einstein season when he jumped behind the camera for the first episode. This episode, directed by series creator Kenneth Biller, feels unsubtle and soapy, constantly yanking the viewer backwards and forwards in time to witness the precocious young Picassos hear and speak portentous line of dialogue after portentous line of dialogue. This could be quite a long haul. BN

In the mid-1960s, with the James Bond film franchise in full flight, producers around the globe battled to find the best way to cash in on the secret-agent boom. In England, Ralph Thomas tried with Dirk Bogarde in Hot Enough for June (1964). In America, James Coburn famously played Derek Flint in Our Man Flint (1966) and In Like Flint (1967). Dean Martin also picked up a gun and seduced the ladies in four Matt Helm films (1966-68). In the first, The Silencers (Fox Classics, today, midday), Matt thwarts the sinister Big-O organisation and flirts with Gail and Tina, played by major screen sirens Stella Stevens and Daliah Lavi. The film – a not-at-all meaningful spy spoof – was a hit and Murderer's Row followed months later. Evil Big-O is back and Matt again flirts with the leading ladies, this time played by Ann Margaret and Carmilla Sparv. Murderer's is beyond trivial, but sometimes fun, and Dean Martin is effortlessly charming. SM

The Time Machine: Back to the future with a vision of horror

Lyrically, it primarily focuses on two aspects of the Carters' lives: their marriage and their success. END_OF_DOCUMENT_TOKEN_TO_BE_REPLACED

Griffiths, who is about to begin editing the Melbourne Cup drama Ride Like A Girl after finishing the shoot, endorsed Hollywood star Sandra Bullock's recent comment that it was time for women to "stop being polite" about gender equality. END_OF_DOCUMENT_TOKEN_TO_BE_REPLACED

"Decades after the nations child welfare system ended the use of orphanages over concerns about the lasting trauma to children, the administration is standing up new institutions to hold Central American toddlers that the government separated from their parents." END_OF_DOCUMENT_TOKEN_TO_BE_REPLACED